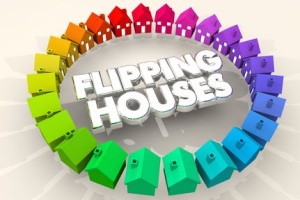 How does something become better known? Typically, when something ends up on TV in some way, suddenly everybody sees it, hears about it, or, at least, becomes vaguely familiar with it. Such is the case for “flipping houses.”

If you had asked someone thirty years ago what a house flipper was, they probably wouldn’t know. Today, though, thanks to various TV shows and such, the term is better known. House flippers have always been around– even in colonial times and back in England before America was settled. In the “old days” only a select few people in a community had the time, money and inclination to flip houses, but today it has become affordably accessible for people of various means– even those who may not be “wealthy.”

In the 1980s there was an economic recession. Stock market earnings were down and house foreclosures were up. Savvy people would buy foreclosed homes, fix them up, and resell them for a profit as the market improved. So modern day house flipping in America really had its start in the late 1980s.

As more and more housing was built in the 1980s and 1990s, the idea of renovating older homes concurrently became popular. Shows like “This Old House” and media stars like Bob Vila encouraged average people to tackle the renovation of their homes rather than demolition. Giants like Home Depot and Lowe’s built their huge stores in seemingly every suburban community in America, making it easier for the average Joe and Jane to “do it themselves,” in regards to home improvements.

In recent times, the idea of fixing up older homes is no longer just limited to contractors and carpenters. Today, there is a lot of information available to help average people get projects done– just think of all the “How To” YouTube videos online, right?

While most people tend to fix up their own house to continue to live in it, there’s a new generation of relatively young entrepreneurs in their 20s and 30s who make a living as house flippers. They buy a house at a low price and live in it while fixing it up– themselves and/or with the help of professionals. Then, after a few months, they “flip” it for more money than they paid for it and invested in it, making a profit. The flippers move onto the next house and repeat the process. It seems to be a lucrative career these days if and when competition is kept at bay.

If you need help financing your house flipping endeavor, contact the experts at MM Lending today.